Vitruvian Boy, a novel that celebrates science. Copies of the book are available on Amazon, bookshops in Lugano, or directly from Lugano English. 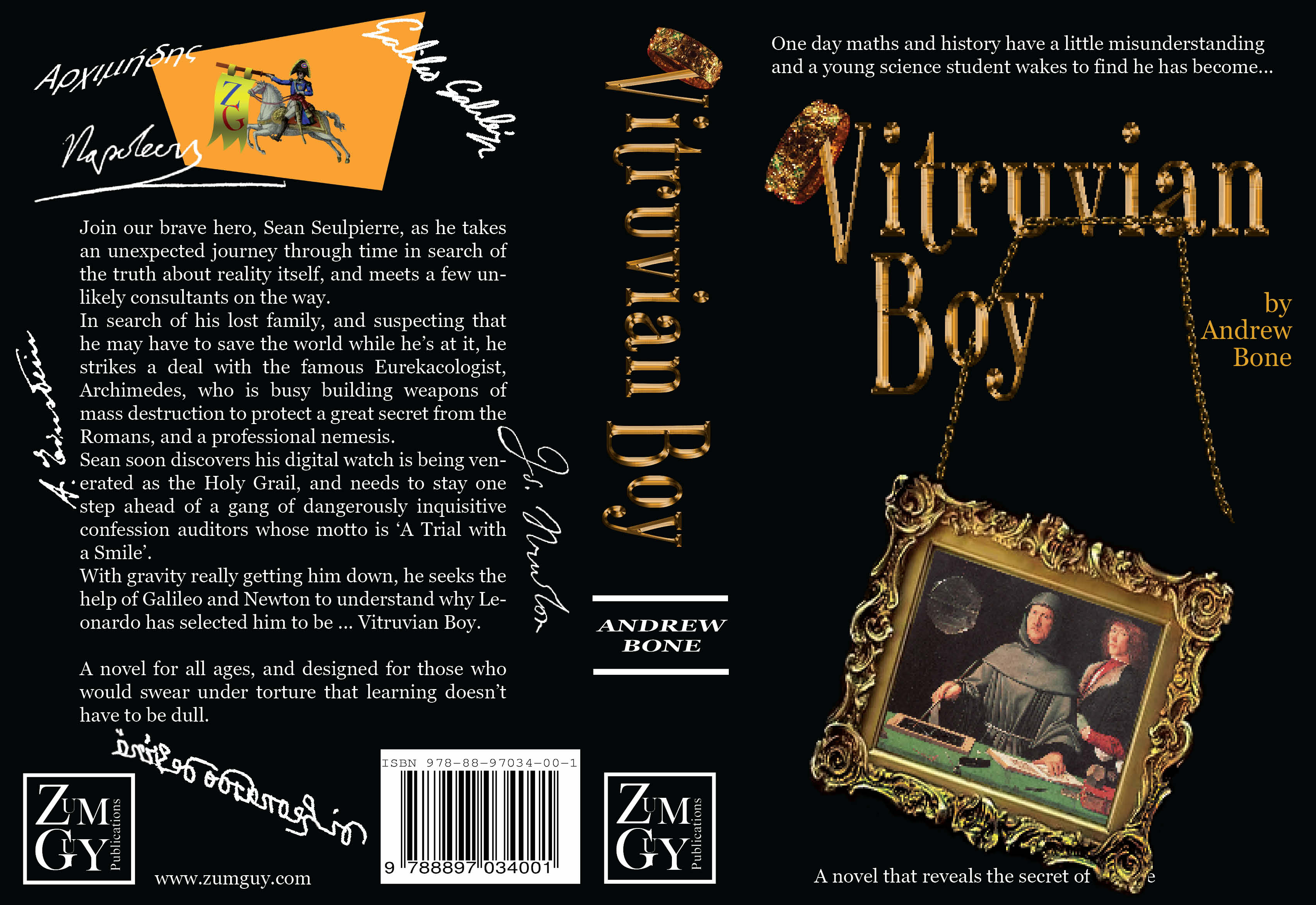 Torn apart by the second of the world wars, series one, the Mediterranean community has been all but reduced to a market opportunity for the multitasking armies of Rome from across the water. Ever ready to pre-emptively defend their trademark, the eagle, the Roman Republicans are determined to use every dirty trick imaginable to engineer a run on the stock of their greatest rival, Carthage.

The little kingdom of Syracuse finds itself fighting cost-effectively for its very survival. Caught in the crossfire, and faced with a 50,000 man trade delegation looming over the horizon, the Syracusans bravely turn their hopes to the genius in their midst, Archimedes, to come up with weapons of mass destruction to protect them.

Into this unlikely scene plops our hero, Sean Seulpierre.

His first act is to immediately discredit Archimedes, the consequences of which could cause ripples of change that leave history in tatters. So it falls to our hero to strike an alliance with the famous scientist and Eurekacologist, as he searches for his lost family and tries to avoid being skinned alive for his troubles. "Where can I find some copper wiring?"
Archimedes thought for a moment before answering: "Try the lads at Ye Olde Bronze Age metal merchants. They are a little old-fashioned, now that everyone is moving over to the new fad of iron, but they do a good job on order."
"But I need copper, not bronze."
"That's ok. Just ask for bronze wires and say 'hold the tin'."

Sean finds himself wondering why his digital watch has such an attraction to him, and why the world has grown to venerate it as the Holy Grail.

With the Mona Lisa safely framed, things are looking brighter for our hard-pressed hero, until that is Cesare Borgia arrives with his own-brand knowledge cappers - their logo: 'A Trial with a Smile'. "What about your other farming guides?" continued Geni. "What about 'Know Your Sheep: Baa Coding for the Modern Shepherd'?"

A man attracted to issues of gravity is a pretty dangerous dude to be around, as Sean discovers - first falling from an oscillating chandelier in the cathedral of Pisa, and then from the famous leaning tower itself.

Galileo Galilei needs an assistant to help him train for this year's summer cannonball dropping olympics. He has a new theory which he reckons will snatch him the cup. But he hasn't considered the crooked interests of a church gambling syndicate, who also happen to be the judges.

Sean catches up with an old friend from Syracuse, only to lose him again on the tower, before he takes a fall himself.

And where does he land but... "To be a scholar you have got to publish papers. And the best papers have got something written on them."

With gravity really getting him down, Sean's arrival in an apple tree is yet another come down.

However, its owner has an idea that might just put him back on track: alchemy...

Together, Sean and Isaac Newton take on the sinister underground world of equations laundering, and end up getting double-crossed by Bro Jacko and Bro JoJo of the infamous Bernoulli family, from Switzerland.

Sean has another encounter with a tower, this time in London, and takes a leap of faith from Olde London Bridge. "Fore t'love of Mr Biggy, I am like to swear everie fourthe worde you utter bee Latin!"
"It's all the rayge in Cambridge, Mumsie. They're called Latin quarters."

Nice town, shame about the bloodshed.

The most frightening awakening he has had yet. Musket and cannonballs everywhere, a beat and section-missing orchestra, and a little conductor, who turns out to be yet another world conqueror. Not another one, sighs Alexandria, which has already had three.

Napoleon has another fate in mind for Sean, as he and Laplace, the mathematician who has a thing for black holes, take him back to his home, in the footsteps of Leonardo. There, they use the Mona Lisa to unlock the secrets of the forbidding haunted house that started all the trouble in the first place.

But something unexpected happens during the Rosicrucian ceremony that follows, and the whole thing starts over again... "Perpetually dark it would be. A great big Blob of Dark."

"How about 'Black Hole'?" suggested Sean.

"Catchy, but no," Laplace shook his ex-aristocratic head. "It's more of a blob than a hole, but thank you for trying."

Without his wig and false moustache, Einstein returns to being a mild-mannered Swiss clerk, and sets about solving Sean's dilemma.

The respite is short-lived, however, when Big Willy himself, the Kaiser, working on a tip-off, decides to check up on his circus performers. Sean finds himself being lined up to be shot by firing squad, and under these circumstances, could only hark back to the future...

Einstein explains to Sean the origin of the award for cleverness beyond all recommended social decency.
[Vitruvian Boy, Chapter 17, Who's relative now?]

Sean is not sure he has been saved from certain death - this could be the famous mythical place where all time travellers go when they have lost their return ticket.

But here he starts to piece it all together, with the help of the most unexpected of all the scientists he could have met, and he has an idea that might just return everything to normal, whatever that is.

The only problem is that Sean has to break a golden rule to do it - he has to disregard the Time Paradox Failsafe...

"What the photonic splut is going on?"

"Yes, I know," replied the robot. "Universal deflation has taken its toll on a once thriving expletive industry."

Sean encounters an unlikely ally in the future.
[Vitruvian Boy, Chapter 19, This is the Way the World Ends]